Apologies for temporarily abandoning the blog; it has not been for want of anything to say, but for want of time to say it in. So this will be a quick round-up of some of the stuff I have been up to in the last week-and-a-half.

First, I have been hard at work on a commission. I don’t do these very often, partly because people usually only ask me for a commission if they want to be depicted as a fairy or demon or some such (for a few commissioned ‘portraits’ in the past have a look at: http://www.nancyfarmer.net/gal_commissions.html ), and also commissions worry me in principle: what if the people don’t like the end result!? That said, I have never had anyone who said they didn’t like the end result, and all of the commissions I have ‘got into’ once I was stated. but all the same, it’s worrying!…

So the brief was… ‘a fairy or fairies on a motorbike’ …possibly as a self portrait to boot. Intriguing. I liked this idea (though secretly I dread painting mechanical objects – they are so unforgiving if you get it wrong), To be honest, I don’t think the end result is really anything like a self-portrait, other than the fact (which I accept), that a large number of my characters resemble me. I used to think this was a problem until a fellow artist pointed out that this is very common amongst artists who paint from their imagination. Since when I have come to see that this is absolutely true, and on a couple of occasions have not been at all surprised, being already familiar with an artist’s work, to find, on meeting said artist, that they look exactly like I would have expected…

Anyway, enough rambling, here were the results – the initial drawing transferred to watercolour paper (not great lighting, I have to say, but it was dark outside).

‘Daisy Chopper’ – painting stage 1 by Nancy Farmer
Next there is a stage of ‘underpainting’ in very thin washes of Prussian Blue (Windsor & Newton Designers Gouache)- a pigment which stains the paper very effectively – that is to say that even if the paper is subsequently washed a coloured stain will remain on the paper, which will become important later…

‘Daisy Chopper’ – painting stage 2 by Nancy Farmer
Most of the paint I use is gouache – basically the same as watercolour but with added ‘body’ – an opaque filler.
Next, colour is laid down on top of the underpainting in more gouache. Again, using only pigments which stain the paper. This is mostly Schminke Artists Gouache, which I prefer to W&N, but W&N’s Prussian Blue is just better at staining. At this point, yes, the painting looks rubbish! 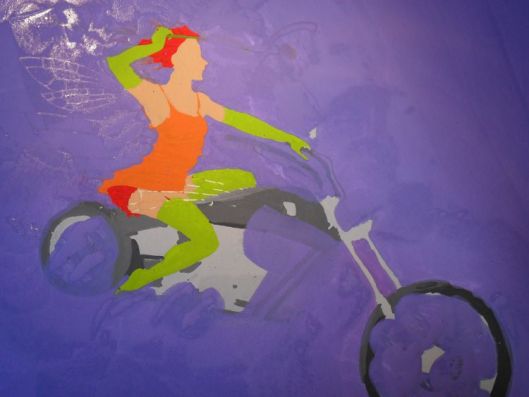 ‘Daisy Chopper’ – painting stage 3 by Nancy Farmer
…but now (below), I have ‘washed’ the painting – literally, by putting it in the bath and hosing it down with the shower-head and a soft paintbrush. All the thickness of the paint washes off, leaving a colour stain still on the paper – which is why the pigments I was using are only those ones which stain the paper. There is very little paint here now, just stain, but it’s a good solid surface to work on top of. And now, suddenly, you can see the original blue painting showing through the colour. 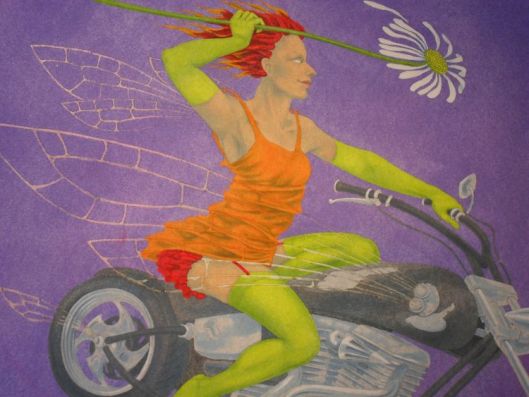 ‘Daisy Chopper’ – painting stage 4 by Nancy Farmer
More washes of thin colour, mostly on the background to give it weight and atmosphere: 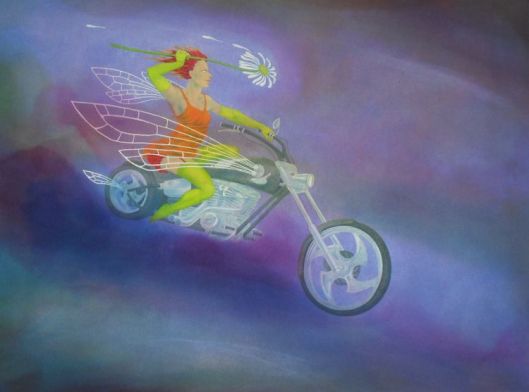 ‘Daisy Chopper’ – painting stage 5 by Nancy Farmer
And then, the finished result. More painting has been done here, but also I have created quite a lot of highlights by actually scrubbing some more paint off – this time using very small stiff brushes which lift off colour only where I want them to. 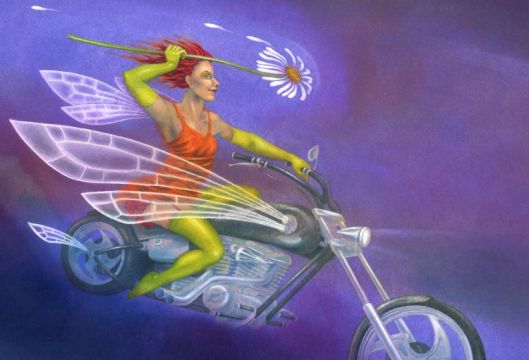 ‘Daisy Chopper’ – painting stage 6 – close-up, by Nancy Farmer
And that is some days work boiled down into half a dozen photographs! If you are wondering about why the fairy in this picture is holding a daisy, I can’t enlighten you! I drew the figure, and her pose, which I liked, suggested some strength and power and that she should have something in her hand – a spear, maybe, or a spear-shaped flower? But they seemed rather obvious, so then I thought that a daisy would add the right note of humour, while accounting for the pose… and who knows, honestly, how it is that weeds get everywhere and spring up in the most unlikely of corners, overnight, when you thought there were no weeds there at all. Perhaps she is The Weed Bringer? There has to be a fairy for that after all…
So, that has been my current artistic work, but I have also been busy with the website, getting it mostly up-to-date after some months of neglect. I have added no less than 11 pieces to the site all this week.
There are the new mezzotints, now 5 in total, 4 of which have made an appearance on this blog already. (click image to see bigger)

They are here on my website: http://www.nancyfarmer.net/gal_mezzotint.html with some larger images and more detail.

Then there was another group of 5 prints – etchings this time – all in black and white with a little gold leaf in each, and all inspired by proverbs about gold, of which there are many. (again click to see image bigger):

These can be found here on my website: http://www.nancyfarmer.net/gal_proverbs-in-gold.html

And then one more print about some of life’s essentials: ‘Wine, Women and Cats’:

Lastly, hardly a week since the Fornicating Fairies drawing was awarded the Grand Prize in the Art Erotica exhibition in Cork St in London, I have to admit that I have let the Fornicating Fairies website expire – not the name, for the moment, but the space that held the site. Along with it the Fetishdollies site as also expired, but don’t despair, if you click on FornicatingFairies.co.uk you will be directed to a section of my shop on Etsy.com, which contains prints of those naughty pictures, and at some point I am probably going to put the pictures onto my main site (with perhaps, adequate warnings for the unsuspecting viewer!). Likewise clicking on FetishDollies.co.uk will take you to a part of my shop on DaWanda.com, where you can not only see the best of those images but you can purchase greetings cards of them too. The reason for allowing both sites to expire is simply that I had had no new work to add to either for nearly three years (longer, I think, in the case of the Dolls site), and so i thought they had maybe had their time. I continue to sell a few hundred of the dolls cards every year, though, so one day, just maybe, I shall take some new photos…

Anyway, just for the hell of it, here are a few of the Fornicating Fairies and Fetish Dollies photos: