I swim at Clevedon, in the Marine Lake and in what we like to call the sea, though you may call it the Bristol Channel if you wish, and this is a little project that came out of a discussion between a few people that I swim with. Someone said we could get hats printed with our name on… in the event that we decided on a name. I suggested that they also needed a picture of the very fine Victorian Pier at Clevedon on them and offered to draw it. Everyone liked the idea of the pier and nobody could decide on a name, so we now have rather funky nameless, but not pierless, hats 😉 (We have since become Clevedon Lake and Sea Swimmers, a.k.a. CLASS, but that came too late for the hats).

So many hats were printed – about 75, that we also donated £1 per hat to MARLENS – the charity responsible for the restoration of our beloved Marine Lake. Which explains the articles in the local papers. And the last picture is a commission I was asked to draw by someone who rather liked the pier drawing and wanted to be in it.

This all happened before Christmas, but I had no time to post the pictures. If anyone is interested in one of these hats – I do not currently have spares but I may get another batch printed so please send me an email. 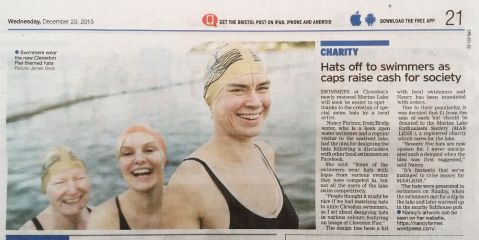