So… I have managed to begin painting the first of the Poison Flower Fairies. I had this idea back in about August of last year, collected many photographs as the flowers came into season, finally worked up some sketches in January and I have at last begun to put actual paint on actual paper, seven months later… 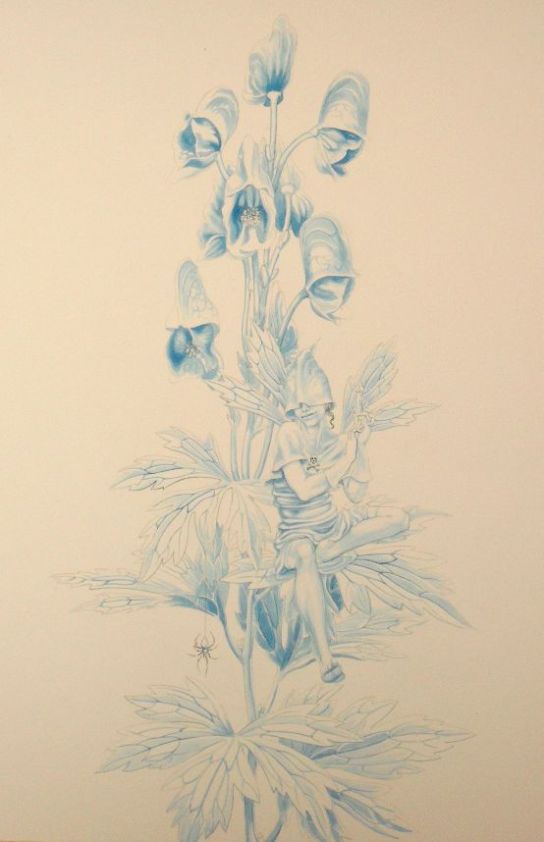 The sketch for this one appeared in this blog entry: https://nancyfarmer.wordpress.com/2012/01/09/sketches-for-the-poison-flower-fairies/

…so, straight into painting. Here is the picture drawn out and the tones put down in Prussian Blue. This is all gouache paint, except for occasionally where it’s watercolour. This is under-painting and will show through subsequent layers of paint… eventually…

…here’s a bit of a close-up of the image above:

Gouache being a water-based and water-soluble paint, you can lay it on and once it is dry you can wash it off again, too. But some pigments will leave a stain on the paper. It’s this aspect of the paint that I’m using when I do unpromising things like in the next photo. Over the top of my careful blue under-painting I have done this:

Which was in fact another bit of careful painting, until I got to the background greenish layer – the last bit to go on, which was more-or-less slapped on on top of everything.  Looks rubbish at this stage but a quick going-over with a soft brush under the shower and my careful paintwork re-appears:

It’s a little washed-out, at this stage (pun intended), so it’s back to the most useful Prussian blue with yet again many more thin washes of paint:

…which is an improvement, but it’s a little lifeless,  so then I added some more thin washes of paint, mostly over the background, and this time using a magenta colour at the bottom, and a touch of white and Prussian blue at the top. This has the effect of adding a bit of depth and pulling the whole thing together:

…and the whole thing so far:

And that is more-or less as far as I have got. More to follow in a few days…

This blog is lacking a more detailed explanation of this process, so in the meantime have a look at some of these on my website and facebook: http://www.nancyfarmer.net/info_materials.html (particularly the ‘Frog Gimp’ one).